With the launch of IGSS Version 13 a system designer now has the opportunity to lock a project. This prevents the risk of having the project open for editing by several people at the same time – and thus several simultaneous versions of the same project.

In IGSS it is possible that several people can open and work on the same project in Definition at the same time. However, this poses the risk that when one person deploys the project, this can “overwrite” recent changes made by others.

To help prevent this, a new feature in IGSS V13 now makes it possible to lock a project. When a project is locked, others cannot get access to work on the same project in the Definition module before the project is unlocked. Below is an overview representation on how the process works. 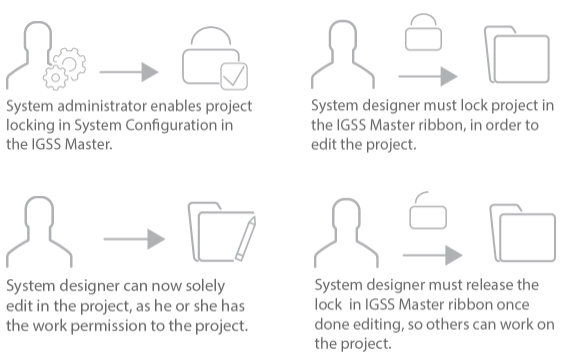 Note, that project locking also requires that Access control has been enabled and that users and user groups are defined.

If Project locking is not enabled, it is not possible or necessary to lock the project first – but then anyone else (with access rights, if required) can also work on the same project.

How does project locking work?

The System Administrator enables project locking in IGSS Master’s System Configuration module and inform all system designers that from now on they must lock a project before editing – and unlock when they are done.

Now every system designer has to logon in IGSS Master’s Home tab and lock the project in the Design and Setup tab to get access to open the Definition module to create and edit a project.

When you are done editing, remember to release the lock again so others can work on the project. 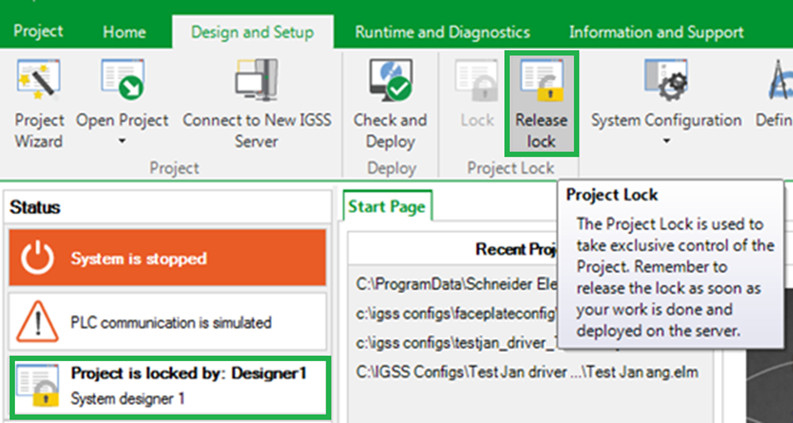 If you try to open Definition to work on a project which is locked by another, the IGSS system will issue a warning message. In IGSS Master’s Status pane you can see if the project is locked, and who has locked it. If that person is not available, a system administrator can force a release of the lock in IGSS Master’s Design and Setup tab.