You can translate IGSS configuration texts, for example alarm texts and instructions as well as object descriptions, digital state names and digital command names into any language you want.

Texts in IGSS are divided into two categories:

Both text categories will be considered identical to the average user as GUI and configuration texts merge into one user-based experience but a system integrator or super-user/developer will have to differentiate between the two.

If you want to translate the configuration texts in IGSS and the Microsoft Access program is not available to you, you can use the ConfigTranslate.exe tool provided in the IGSS program.

You must load the configuration and set up the languages.

In the grid area of Translate IGSS configuration form, select the row containing the text or alarm number reference and in the Target Text column, enter a translation text for the source text.

You can also select the source text row and click the Edit button to open the Translate text form. 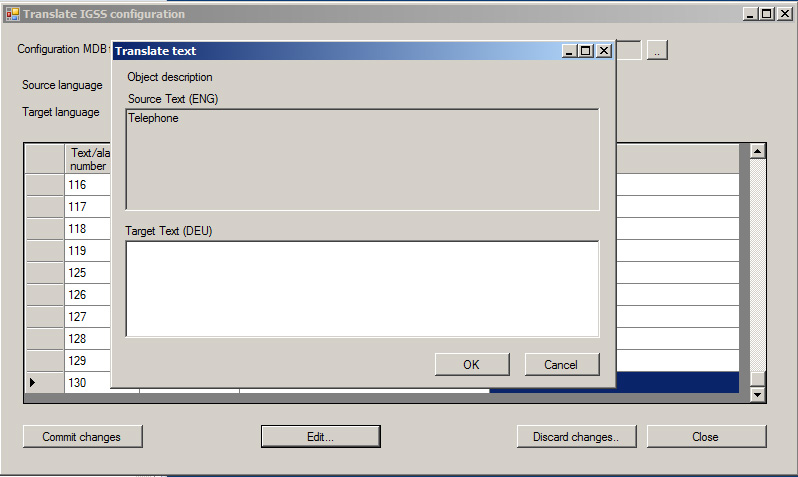 You can use the CTRL+C, CTRL+X and CTRL+V shortcut keys to copy, cut and paste texts to and from the Windows clipboard. If you conduct copy/paste operations in the grid rows, you must first enable row editing by pressing the F2 button.

When you are done translating, click the Commit changes button to save your translations and update the configuration database.

The supported and partially supported languages are available for selection on the Change Language button in the Home tab of the IGSS Master or in the System Configuration form > Supervise and Language tab > Language group > Primary and Secondary fields.

You can add additional unsupported languages to the drop down lists in the Primary and Secondary fields and the Change Language button mentioned above.

Some language codes, mostly ethnic-oriented or tribal languages, will be rejected by the .NET framework, despite using the three-letter Microsoft-based language codes. If you select one of these languages, you may experience errors and instability from within IGSS.

The configuration translation tool is only available for IGSS 11 after you have updated your IGSS program.