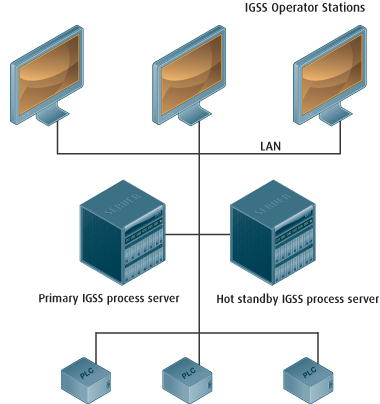 If one server fails, the operator stations will automatically switch to the operational server, and normal process control is continued. When the faulty server is brought back online, it can request the data collected during the downtime period from the other server. The operator stations that were switched to the online server can be configured to automatically switch back to the restored server.

Synchronization of local data between the two servers. Operations that do not require any communication with a PLC are local to each server in a dualized system. These local objects can also be synchronized between the servers.

This is done by adding a synchronizer application to the system which connects to both servers and routes local object information between the servers. Prior to this new application, all synchronization between servers had to be done “through the PLC”.