Bulk Configuration with the Group Object

The Group Object feature in the IGSS package is a design element, which aims at saving costly hours of development. The idea of the Group Object is to allow the system designer to reuse a whole collection of any number of related objects and their descriptors so they are viewed and organized as one complete entity.

Design the First - Copy the Rest

A good example of the use of Group Object functionality would be the design of a pump station. In the process diagram, there are several different descriptors related to the pump.

Once put into the process diagram, all of the above can be collected, saved and reused either in the same IGSS configuration, or application, from which they were taken, or exported for use in a whole new IGSS configuration. All object properties, including all the descriptors are copied into a group for which the designer finds an appropriate name.

In the example dialog, the system designer has created a group called PUMP_STATION-Delta. He places all the objects and their descriptors, which constitute a pump station into the group. Later on, the system designer copies the Group PUMP_STATION-Delta into another part of the configuration on which he’s working and the complete pump station is replicated as a new unit. 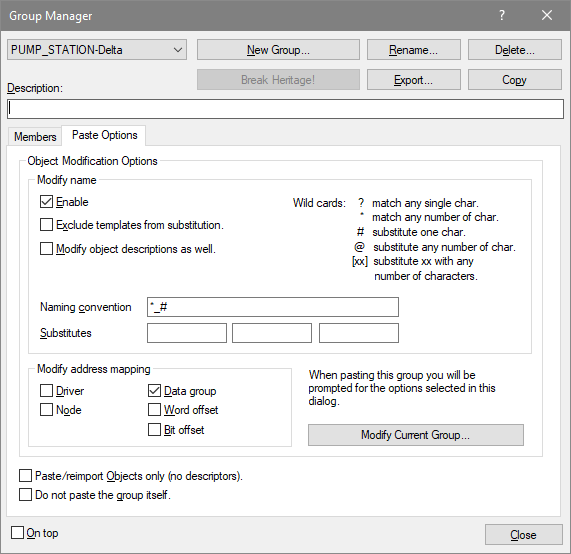 The Group Manager dialogue in the Definition module for creating reusable Groups.

When using group to build libraries, the aim is to create a library of templates of various object types to be used in new IGSS configurations or applications. The designer often needs access to the same types of analog and digital templates due to projects with similar process visualization and control elements and reuse of these objects and descriptors is often very advisable.

Follow us on social media and receive news updates when available